Incense of Freedom – The tale of fragrant livelihood -

Owing a small business isn’t very easy. It takes guts, skills, trials, errors and patience to get the business to the destination one wants it to go. After all, Rome wasn’t built in a day. And in a country like India where patriarchy plays a dominant role, it is harder for women to come out and engage themselves in any services which could make them independent both financially and socially. While success doesn’t comes overnight, ensuring the small business is successful from all the sides be it empowerment of the women, making a good annual turnover, levelling up the women’s status socially – it all had to go through their fair share of hurdles. 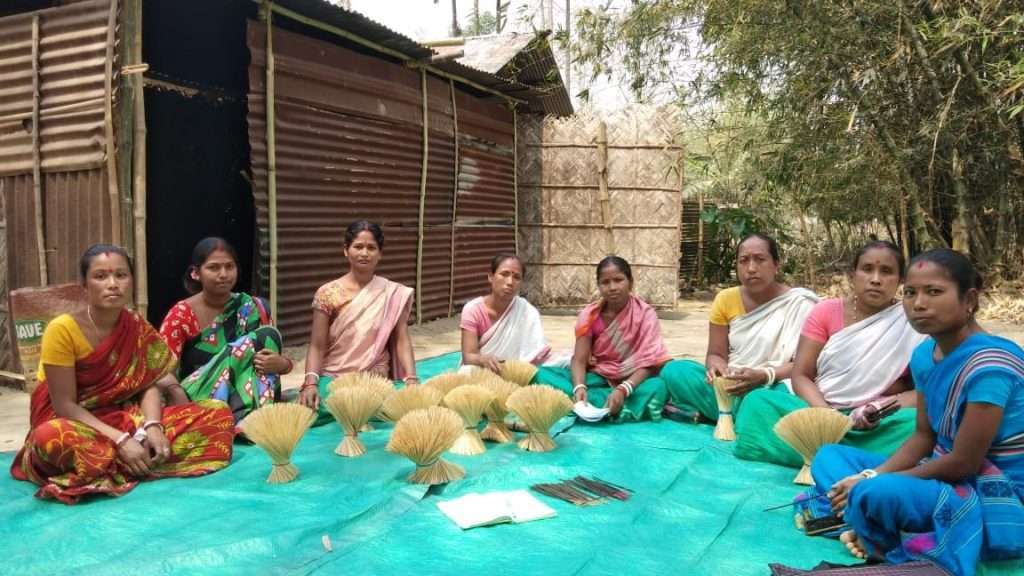 Such is the tale of 16 women hailing from a village of Assam in Northeast India who decided to take matters to their own hands and paved their way into the business sector. With dreams of making a better livelihood, they started their own incense sticks making industry and named it “Birangana” which translates to courageous woman. It was April 2021 when I got to visit the Birangana Agarbatti Industry on my internship with SeSTA. Upon the visit, I got to come across these hardworking bunch of women who were busy making incense sticks. They would roll the “masala” – as they would say in their language – into the thin bamboo sticks and let it dry out in the sun until it can be burnt and used as incense sticks. Upon asking about their journey, I got to know that it began from a convergence meeting between SeSTA and the RSETI (Rural Self Employment Training Centre.) Therefore eight women went and got certified trainings. Further on, those eight woman came back to their village and started training eight more woman. It is also of notable importance that all of those sixteen women who are engaged in the industry belonged to different Self Help Groups who reported to the same Village Organisation. In February 2021, with a debt of Rs 10000 from the VO, they started preparing for the industry. They got their raw material for the incense from Barpeta and bought bamboo for the sticks locally and finally in March, they kick started it. Sumitra Chowdhury who is one of the worker says although there were several backlashes from the other villagers, yet those bitter words couldn’t lower their high spirits of owing a business. The women altogether makes 6000 to 7000 sticks per day and they sell them off themselves at various SHG meetings, VO meetings and also they try to sell them off to shops but due to the lack of registration and trade mark, the women are not being able to sell them off in the market. The women shares that once their industry is registered, they would be able to produce more and sell them off with less hustle. In a competitive time like today, these women have proven that no matter how tough it may seem, one can always start from scratch and build an entire empire. Their guts, skills, patience has paid off really well in terms of financial stability, self-confidence and social status. In today’s world, being financially secure is a basic necessity and this agarbatti industry has proven that no matter how poor or marginalised you are, if you have dreamt of making it big, you can do it. And in this case, SeSTA acted as a catalyst in empowering the women to build the industry. Although they have a long way to go, they still walk with their heads held high with pride and honour for their skills. With thousands of dreams in their eyes, these biranganas are setting the scene for small scale industries in rural Assam with a diction of woman empowerment and breaking the shackles of patriarchy one step at a time.